The smallest Bluetooth speaker from Beats, the Pill+ is still able to deliver powerful audio from its modest, attractive frame. If you’re expecting truly massive bass, you’ll need to look elsewhere, but the Pill+ provides a clean, well-defined, balanced listening experience, a port for charging your mobile devices, and a built-in speakerphone for fielding calls on the go. There’s plenty of strong competition in this price range, however, and most of it offers more in the way of features and/or audio performance.

Design
Measuring 2.5 by 2.7 by 8.3 inches (HWD) and weighing in at a surprisingly hefty 1.7 pounds, the Pill+ has an oblong, slender contour that will fit fairly easily in a tote, but less so in smaller bags. Available in matte black or white, the Pill+ has a minimalist design—other than the familiar Beats logo on the upper panel, there are few flourishes. The Apple effect (Apple purchased beats in 2014) is noticeable only in subtle ways—the connection point for the charging cable is not a micro USB port, as is the case with virtually all other portable Bluetooth speakers, but a Lightning port.

Behind the front-facing, rounded speaker grille, four drivers deliver the audio—two midrange, situated toward the center, and two tweeters, located closer to the ends. A rubberized band wraps around the speaker, serving as secure footing to prevent movement on table tops, and it also houses the control panel.

The controls are laid out across the top—from left to right, there’s a power button, an LED battery life gauge, a Beats multifunction button, and plus and minus buttons for volume, which work in conjunction with your mobile device’s master levels. The central multifunction button controls playback, track navigation, and call management, depending on how many times you tap it.

Along the back panel, a snap-shut rubber cover protects a panel housing a USB port (so you can charge your mobile devices using the speaker’s battery), a 3.5mm aux input, and the Lightning port. 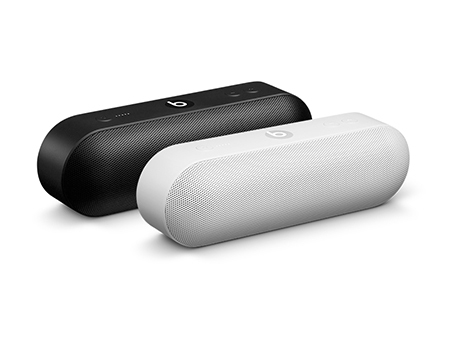 There’s also a Pill+ app, free in the Apple App Store for most newer iOS devices, as well as an Android version that works with limited models. The app is in no way necessary in order to operate and enjoy the speaker, but it does allow you to link up two Pill+ units and use them as left and right channels if you wish. If you have only a solo speaker, the app doesn’t bring much to the table.

Beats estimates the Pill+’s battery life to be roughly 12 hours, but your results will vary with your volume levels, and your mix of wired versus wireless playback. The speaker ships with a Lightning cable, a wall adapter for the cable, and a felt drawstring tote bag. It’s unfortunate that, at this price, the speaker doesn’t ship with a 3.5mm audio cable, given the inclusion of the aux input.

Performance
On tracks with intense sub-bass content, like The Knife’s “Silent Shout,” the Pill+ delivers a solid sense of deep bass at moderate volumes. The higher the volume goes, the more the bass thins out—there’s some digital signal processing (DSP) in place that prevents the speaker from distorting at maximum volume levels, but also takes some of the thunder out of the synth drums on this track. However, the clean delivery is worth it, and we wouldn’t expect truly deep bass from a speaker this size.

Bill Callahan’s “Drover,” a track with little in the way of deep bass in the mix, gives us a better understanding of the Pill+’s overall sound signature. The drums on this track can sound overly thunderous and unnatural on bass-forward speakers, but the Pill+’s modest size keeps this aspect in check. Callahan’s baritone vocals get some powerful low-mid presence, bringing out their richness to an impressive degree. If the higher frequencies didn’t step up and add some treble edge and contour to the vocals, things would sound muddy, but the Pill+ delivers a rich and well-defined—if not entirely crisp—response.

Part of the crispness issue is that the drivers aren’t angled upward, so you miss much of the definition the tweeters bring to the table unless they happen to be lined up with your ears. When the tweeters are lined up properly, things sound significantly brighter, with the rich bass still very much a part of the mix.

On Jay-Z and Kanye West’s “No Church in the Wild,” the kick drum loop gets just enough high-mid presence to accent the loop’s sharp attack, but you hear and feel just as much of its thumping sustain in the lows and low-mids. The sub-bass synth hits that punctuate the beat lack the truly deep lows that make their presence powerful. The vocals on this track are delivered with clarity in the high-mids, without too much sibilance or any hints of harshness.

Orchestral tracks, like the opening scene in John Adams’ The Gospel According to the Other Mary, get an extra dollop of low frequency presence, but it’s balanced out by the brightness of the drivers, particularly when the speakers are lined up with the ears. Most of the lower register instrumentation on this track exists in the lows and low-mids—there’s little in the way of sub-bass here—and thus the Pill+ is able to accentuate its presence and beef up the mix a bit. This is obviously not a sound signature that will appeal to purists, but it’s a fairly balanced, rich, and clear sound.